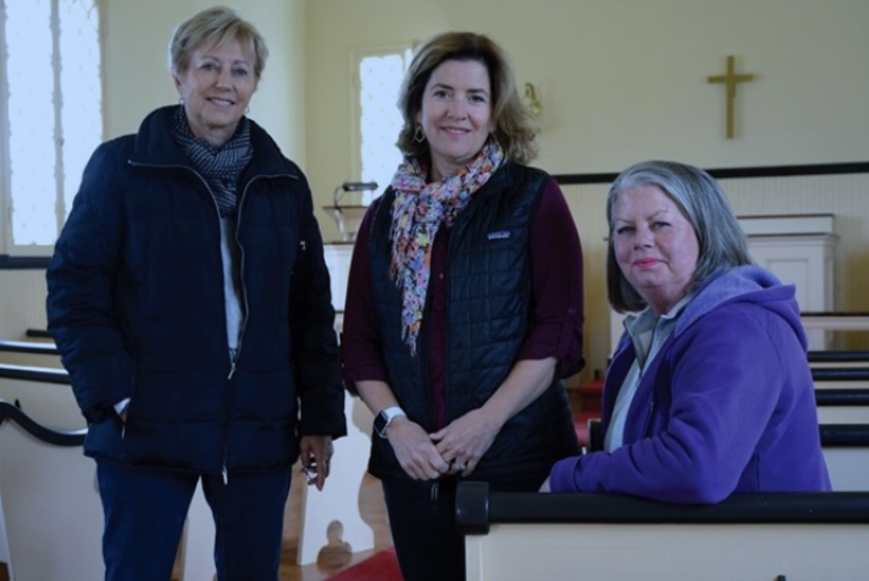 From left, Marsha Henderson, Laurie Wright and Cathy Messier are on the committee that is planning 125th anniversary celebrations for the Holloway Memorial Chapel in Crystal Beach. - Richard Hutton/Torstar

There’s a small, white clapboard church that has stood the test of time in Crystal Beach.
The Holloway Memorial Chapel on Point Abino Road is set to mark its 125th anniversary this summer and there are plenty of events planned over the course of the summer to mark the occasion, including a special service in July 28

The chapel was established in 1894 — predating the point’s landmark lighthouse by 21 years — by Harriet Holloway Stafford and James B. Stafford in memory of Mrs. Stafford’s parents, Isaac and Mary Ann Holloway. The Holloway family and descendants continue as longtime residents of the area.

“The whole point was owned by the Holloway family at one time,” said Marsha Henderson, who is chairing the committee tasked with coming up with programming for the celebrations.

At that time, Point Abino was home to a sand mining operation. When those operations ceased, more residences were built in the area and the church, with the mission of creating residences for people of all faiths — was established.

“That mission is still the mission today,” Henderson said. “It has such a rich history. People used to come here by canoe or horse and carriage.”

The special service will be held under a tent on the chapel lawn, followed by a reception.

The committee is also looking to connect with the many couples who were married at the church and are hoping they will come back for the milestone celebration.

“Making a special request,” said Laurie Wright, a member of the committee.

“We’re putting out the word any way we can,” Henderson added.

“This is quite a milestone for the chapel, which has been offering services continuously for the last 125 years since its founding,” said Marth Rasmussen, president of the chapel’s board of trustees. “The board of trustees includes both Canadian and American members, who are all volunteers, and it is quite an undertaking to present the season each year.”

Other events planned over the course of the summer include an official opening of the chapel on June 23 with a ribbon cutting with guests Mayor Wayne Redekop and Ward 5 Coun. Don Lubberts and Holloway family descendants. Three days later, on June 26, the chapel will host its 60th annual Strawberry Festival and Auction at the Buffalo Yacht Club, 1007 Point Abino Rd. Tickets are $8 in advance and $10 the day of the festival.

For more information on services and special events, visit https://www.hollowaymemorialchapel.org or for tickets to the Strawberry Festival, call 905-894-2840.

Richard Hutton is a Reporter-Photographer for Niagara this Week, covering everything from politics to community stories and everything in between in Niagara’s southern tier.
Email: rhutton@niagarathisweek.com Facebook Twitter