Point Abino has long been a summer spot for folks from across the border, joining full-time residents on the shores of Lake Erie.

And every year, the Holloway Memorial Chapel hosts a joint service with officiants from both sides of the border. But with the chapel marking its 125th anniversary in 2019, this year will be extra special.

The joint service takes place Sunday, Aug. 25 at 10 a.m. and will be led by Venerable Dr. John Course, rector of Holy Trinity in Fonthill, who will be representing the archdeacon of Niagara and the Rt. Rev. R. William Franklin, retired, assistant bishop of the Episcopal Diocese of Long Island, formerly bishop of Episcopal Diocese of Western New York for eight years.

“I am delighted to participate in celebrating the 125th anniversary of our cross-border relationship,” Franklin said. “The time we spend together, year after year, as Americans and Canadians — enjoying summer recreation at a lake whose waters we share, worshipping together — bridges the differences between us and celebrates what makes each of us unique.”

Course, meanwhile said the 125th year for the chapel was “a wonderful milestone to celebrate."

“It is known for an inter-denominational community of Americans and Canadians who come together to worship, to listen to inspiring speakers and engage in respectful discussions. Those who have been married in this chapel also see it as a special place, as do family members who have had the lives of their departed loved ones celebrated there.”

The joint service is the last major event marking the anniversary of the chapel. Previously, a ribbon-cutting ceremony was held in June with area public officials and a major celebration service was held in July 28 that was attended by more than 200 people. Included in that attendance were 15 couples who had wedding ceremonies over the years, with one couple married at the chapel over 43 years ago.

The Holloway Memorial Chapel was established in 1896 by Harriet Holloway Stafford and James B. Stafford in memory of Mrs. Stafford’s parents, Isaac and Mary Ann Holloway. The Holloway family and descendants continue as longtime residents of the Ridgeway area.

The 2019 service season concludes Sept. 1. The chapel welcomes people of all faiths. For more information on services and special events, visit www.hollowaymemorialchapel.org.

Richard Hutton is a Reporter-Photographer for Niagara this Week, covering everything from politics to community stories and everything in between in Niagara’s southern tier.Email: rhutton@niagarathisweek.com Facebook Twitter 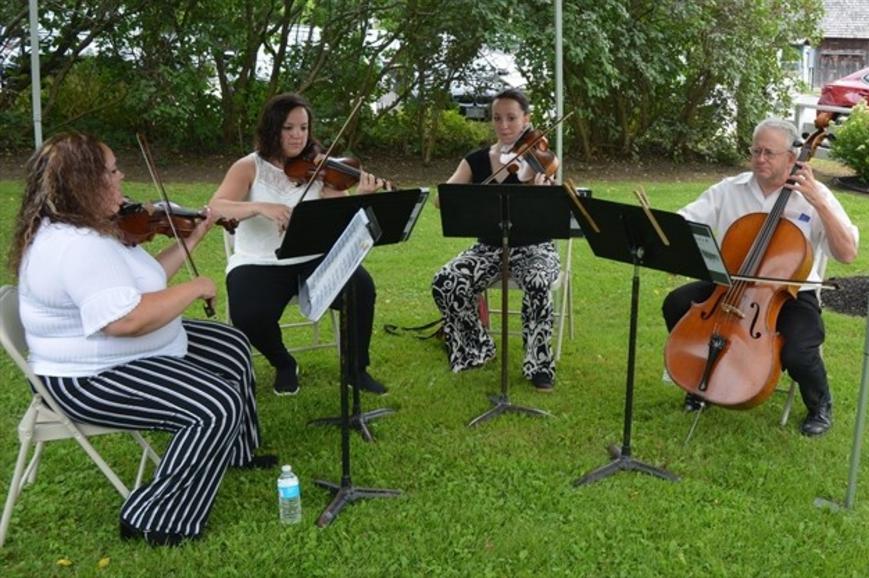 The Fever Pitch String Quartet provided background music during a reception to celebrate the 125th anniversary of the Holloway Memorial Chapel in Crystal Beach back in July. The celebration, which included an outdoor church service, cake and other refreshments, was one of the events held to mark the milestone. The final event, a cross-border church service, will be held Sunday, Aug. 25. - Richard Hutton/Torstar