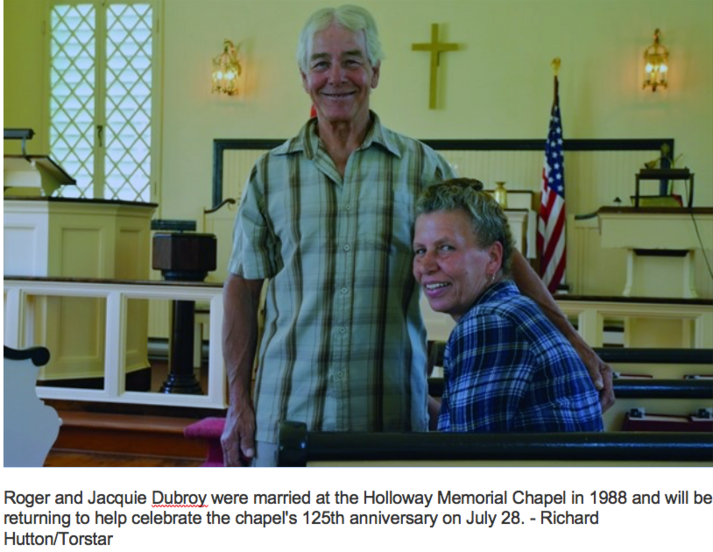 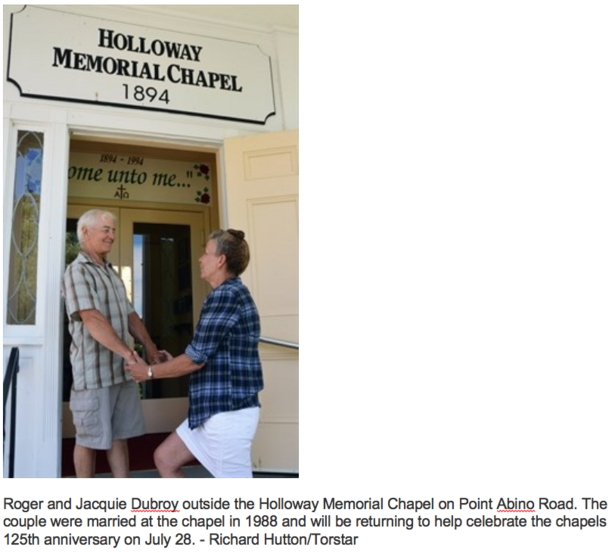 To celebrate its 125th, Holloway Memorial invites couples invited back to where their wedded bliss began

There’s one thing that Roger Dubroy recalls about the day almost 31 years ago when he married his wife, Jacquie.

“It was hot that day — about 98 (F),” Roger recalled of that August day at Holloway Memorial Chapel back in 1988. “We were all dressed for the wedding and everyone is sweating.”

For Jacquie, the reason the couple chose the chapel for their wedding was simple. “We really liked the chapel,” she said.

The Dubroys, who will be celebrating their 31st wedding anniversary on Aug. 13, are one of hundreds of couples who have gotten married at the small white church on Point Abino Road in Crystal Beach. They plan to be among many couples who tied the knot there to return to the chapel to help mark its 125th anniversary.

There will be a special church service held under a tent on the chapel at 10 a.m., followed by a reception and cake cutting.

The Holloway Memorial Chapel was established in 1894 — predating the point’s landmark lighthouse by 21 years — by Harriet Holloway Stafford and James B. Stafford in memory of Harriet's parents, Isaac and Mary Ann Holloway. The Holloway family and descendants continue as longtime residents of the area.

Since records were kept in the early 1900s, more than 275 weddings have been conducted at the chapel for couples from both Canada and the United States. In addition, many baptisms, funerals and memorial services have taken place on the historic grounds.

Roger and Jacqui both lived in the area back in the 1980s and have remained here, with both being employed just down the road — Ron with the Point Abino Dunes Corp. as a property manager and Jacqui as a personal assistant for the Rich family, the owners of Rich Products, which is headquartered across the Niagara River in Buffalo but has a factory in Fort Erie.

Debbie Bauer, treasurer for the chapel, has fond memories of her wedding day to her husband, Mark.

“When Mark and I were engaged there was no doubt where we would be married because the chapel, the members and this area meant so much to both of us, she said. “Our transportation on that very special day 34 years ago was a horse-drawn carriage and people stood along Point Abino Road waving and wishing us well.”

This season, five weddings will take place at the chapel.

The church continues to hold weekly services during the summer on Sundays at 10 a.m. The chapel is located at 1025 Point Abino Rd. South.

Richard Hutton is a Reporter-Photographer for Niagara this Week, covering everything from politics to community stories and everything in between in Niagara’s southern tier.